In my previous post, I introduced the Oregon Drinking Watersheds project and I described the web application in detail. In this post, I will discuss the process we used to compile the data.

We carried out this process under the direction of, and in partnership with Erik Fernandez of Oregon Wild.

The data for this project come from multiple sources

The primary data source for the watersheds project is the Surface water drinking water source areas in Oregon dataset, published by the Oregon Department of Environmental Quality (DEQ). This dataset delineates all community public water systems using surface water directly, or groundwater under the influence of surface water.

For example, the image below shows how DEQ maps the data for the Clackamas River watershed. 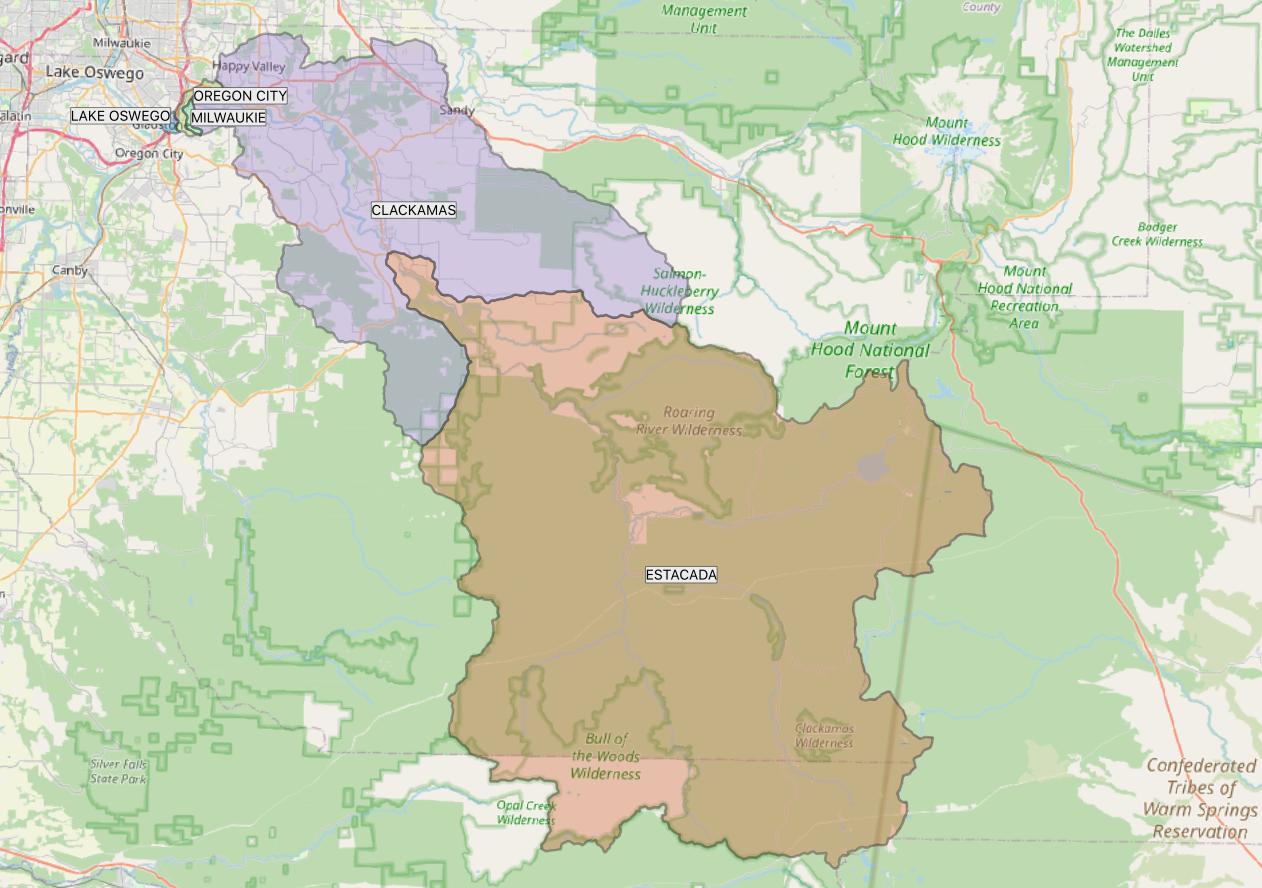 There are five non-overlapping sections of the Clackamas watershed. Moving upstream from intake to intake, they are: Lake Oswego, Oregon City, Milwaukie, Clackamas, and Estacada.

The DEQ data source does not include population information.

To obtain population data, we consulted primarily Oregon Health Authority’s (OHA) Drinking Water Online database. One of the data items available is the population being served by a given water system. For example, for the city of Estacada, the site shows a population of 3,725.

Finally, for population numbers difficult to come by, we resorted to individual water provider and city websites.

We used the Oregon Rivers (Rivers Reach) dataset and the Oregon Watershed Boundary Dataset, both available at the Oregon Spatial Data Library, to assist in understanding water flows and watershed boundaries when analyzing areas with complicated topographies (e.g., Umpqua River), and areas where upstream watersheds were missing from the DEQ dataset (e.g., Rogue River, Chetco River).

We followed a structured methodology

An additional requirement was to include the total downstream population for each watershed record (i.e, total population from a given watershed and below).

Note that all water systems located in shared watersheds are represented as overlapping polygons. Given an arbitrary geographical location, we can easily produce a list of all polygons (and associated communities) that intersect that location (multiple items, or just one when there are no overlaps). This exposes all the water systems related or connected to the location. Moreover, by sorting the list in descending order of total population, the list can be presented in downstream order!

To perform this analysis, we used the QGIS GIS, an open source application for geospatial analysis and mapmaking. It is an extremely powerful GIS package and it is free!

We also used the Mapshaper Command Line Interface (CLI) to generate the GeoJSON dataset used by the web application. Mapshaper is also open source and free.

We consulted the population data sources and updated the DEQ watersheds with the corresponding figures.

There are cases in which two or more watersheds are used to supply water to a single community.

To delineate the full extent of each watershed, we performed the following steps:

The method is the same, but it becomes a bit tricky, when we find watersheds that have multiple “branches” (e.g., Umpqua River). We used the hydrography data to visualize the direction of the water flow, in order to help decide which polygons should be merged. This method also works for tributary watersheds located inside larger units (e.g, city of Ashland and Rogue River watershed).

The example below shows the watershed for the city of Clackamas. On the left is the DEQ shape. On the right is the extended watershed, after performing the steps above for one iteration. 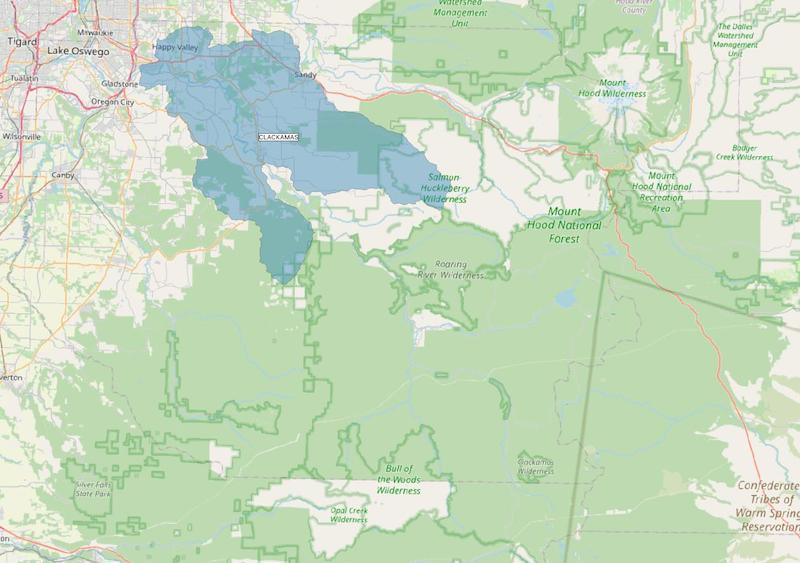 City of Clackamas - Before 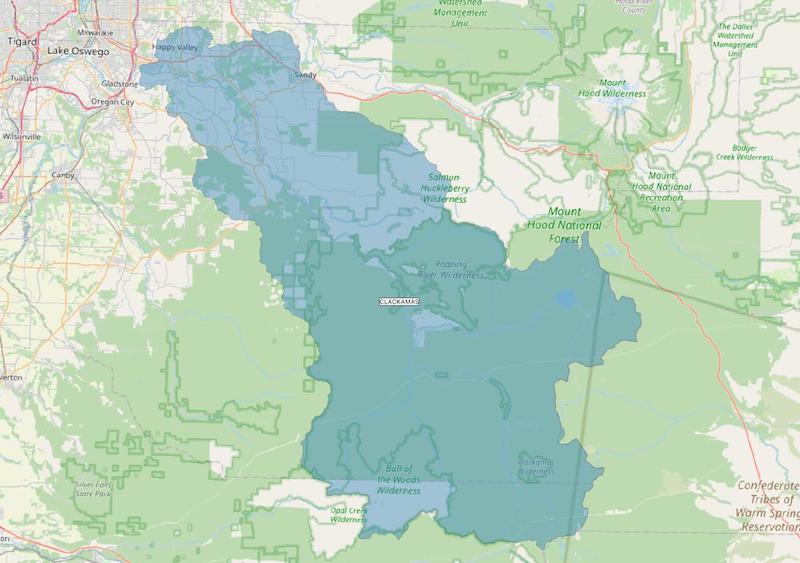 City of Clackamas - After

In some instances, there were entire upstream watershed sections missing from the DEQ dataset. Take, for instance, the city of Gold Beach. In the DEQ dataset, the watershed is limited to the Lower Rogue and the Lobster Creek 5th field watersheds. So we added the missing parts, which include the entire upstream Rogue River and Illinois River watersheds. Often in these cases the intake is a well that is influenced by surface water.

We added the watersheds for the cities of Brookings and Harbor, from the intakes up the Chetco River (see image below). Oregon Wild determined that these water sources should have been considered “surface water,” but they were missing from the DEQ dataset. 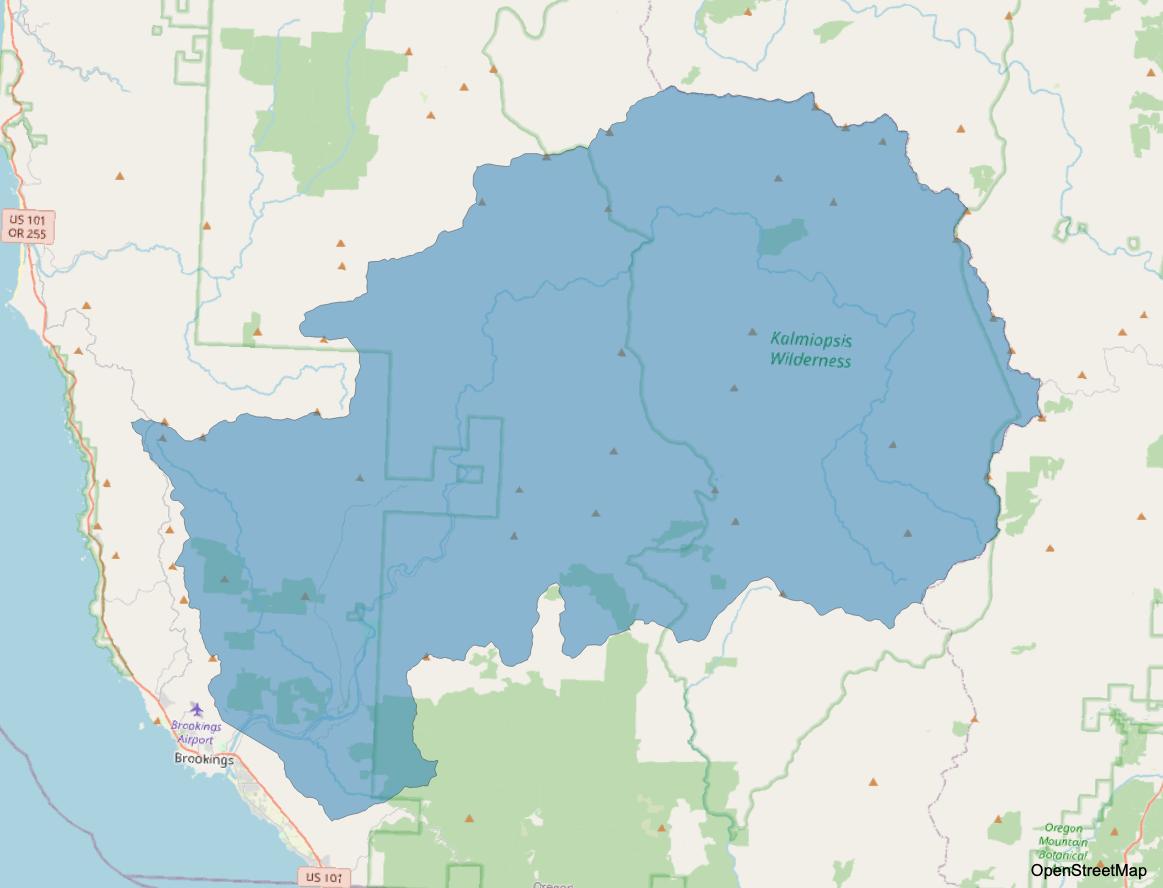 We removed inactive and zero population watersheds. We also removed the watershed for the city of St. Helens, as the source is an underground aquifer, so it was deemed to be a groundwater source as opposed to a surface water source.

We ran a geometry snapping algorithm to make sure all overlapping and adjacent polygons lined up exactly against each other, thus eliminating undesirable visual artifacts when viewing the dataset. We used a tolerance of 200 feet.

Given the way we have constructed our dataset, in any set of intersecting polygons, the ones downstream are always larger in area than the ones upstream. So, to calculate the total population of a watershed, we just have to add to its population, the population of every larger (or equal) intersecting watershed.

The algorithm’s pseudocode is laid out below.

We implemented the algorithm using QGIS' Python console capability. It takes just about 10 seconds to run. You can inspect the code here.

We generated a separate GeoJSON dataset using the WGS84 coordinate reference system (CRS) to be used in the web application (the source CRS is EPSG:2992 - NAD83 / Oregon GIC Lambert (ft)).

To reduce the size of the dataset, we ran a simplification algorithm and limited the precision of the latitude and longitude coordinates to four decimals.

It should be noted that, for the web dataset, we decided to drop the Columbia watershed extensions to the cities of Clatskanie and Rainier, since the populations involved are relatively small, and the large polygons tended to clutter the web view by their sheer size.

There were some challenges to overcome

This project was quite complex with numerous difficult decisions on how best to represent the most accurate data and mapping available.

Complicating factors for some cities and watersheds include cities that get their drinking water from multiple watersheds, and cities that get their drinking water from different sources based on time of year. We also suspect that there are many small watersheds that may only serve small populations which are not mapped by DEQ, and thus are not included in this analysis. We added those that we were aware of, but likely not all.

We attempted to stay true to answering the question, “for any given spot on the landscape, how many people depend on this spot for their drinking water?”

We know that there is room for improvement. If you see any errors in the data, please contact us and we’ll take a look.

The results of this project are available on Github, and since all the data have been derived from U.S. and Oregon Government sources, they have been placed in the Public Domain.